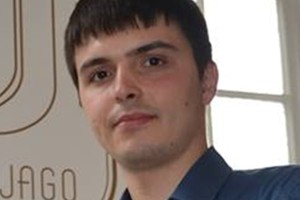 I joined the Train2Game courses on October 2012 and as soon as I started to study I never regretted my choice. I’ve always received help from my tutors when I needed it and, even if sometimes the material is too easy for me (I started to study programming languages at the high school), the courses cover every single aspect of programming games for the game industries. In one year of the course I grew up professionally and personally. Thanks to Train2Game I won a Windows competition for young developers, I met VIP’s from the games industry. Again thanks to the train2game staff, I met the Derp Studios, the company where I’m actually working as Lead Programmer. And I think that there’s much more waiting for me in my future. Again, and never enough, thanks Train2Game.