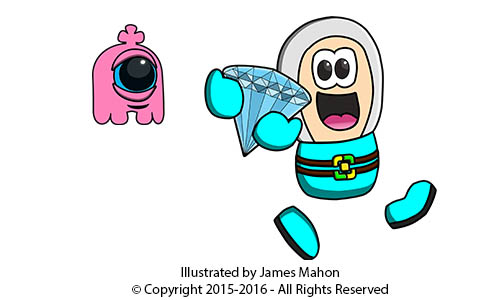 James Mahon, 25, from Birmingham wants students to join him in making awesome games for kids. James is on the Games Design course, is coming to the end of his studies and has so far created two games. The latest title he’s working on is a traditional platform game, with cartoon style graphics and comic book sequences. He’s specifically looking for is looking for level design and QA.

James Mahon, Train2Game student: ‘I am studying Game Designer course and enjoying it, I have almost finished it. I’m using everything I have learned and have created two games in the last year.’

‘I am looking for team members that enjoy working in a team and can work towards a common goal. I hope to make good connections with other designers and create some team spirit to help make better games. I am looking for a level designer to work with as a team. I am just a designer that can conceptualize art and implement features. Unfortunately, designing levels is outside of my area of study.’

‘I have finished prototyping a simple platform game and looking for a QA Level Designer to help design linear levels and test that they are fun to play. I have concept art of the two heroic characters and the villain.  The aim is to create a game with mass appeal in its characters and long-lasting value as a sustainable franchise.’

‘This is a traditional 2D platformer featuring lovable characters that will appeal to boys and girls. This children’s game features, a rice grain on a mission to find the lost rice grains with the aid of his companion, a pixie. Their ultimate objective is to defeat the mutant bug that terrorized the rice grains into fleeing their home.’

‘Another, concept on paper is an educational game featuring a ‘cool’ narrative character on duty to teach kids the importance of safety. This game will be created for school kids and in web browser for accessibility.’

‘Both of these concepts will have HUGE levels to design. That’s what I want help with. Above all, these concepts need some team spirit to help make a better game.’

‘Having played many kids games when I was younger, I still can understand what makes them fun to play for kids. I was a kid once and some kids have negative influences so the aim would be to create a positive influence through entertainment in a video game.’

‘I plan on making video games for kids/teenagers from 7 to 18. I have a few concepts on paper that are perfectly viable. Kids games aren’t as mainstream as adult games i.e Grand Theft Auto, but games don’t have to involve gratuitous violence to be fun – cartoon violence can still be fun, or even, no violence.’

‘I plan to start of small and grow big in the future with better games. I have big plans for my team to create big games that have a lot of value. I enjoy playing hardcore video games the most. Ubisoft inspire me.’